It’s been a pretty crazy few weeks. Since I last posted here, I’ve met my Midlands3Cities PhD cohort at a two-day welcome event in Nottingham, crammed my face with cream teas in the coffee shops of Cornwall, and chaired an international conference at the Shakespeare Institute. There’s been so much to blog about, but no time to write! I’m now taking a well-deserved few days to chill before hopping back on the dissertation train. Watch this space for gooey details of clotted cream and BritGrad 2016! 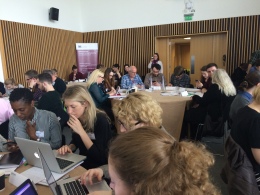 As part of my chill-out schedule (there’s irony in there, somewhere…), I went to see my very first ballet on Tuesday: The Winter’s Tale at the Royal Opera House in London. It was bloomin’ brilliant. The choreography was gorgeous, and the score made my insides feel like they were being nourished by a big bowl of melted chocolate. Here’s the trailer if you’d like a closer look:

Going to see this production wasn’t exactly escapism from the stuff I’m working on at the moment, though; my MA dissertation project is all about approaches to stage and costume design for The Winter’s Tale. There’s a real trend in staging this play at the moment, and I’m analysing three very different recent productions to find out how design’s been used to solve the play’s problems:

The Royal Ballet’s adaptation of The Winter’s Tale isn’t currently a focus of my project, but it actually kind of blew me away. I sat in my velvety seat gaping as some of the trickiest elements of the play were solved with simple, elegant design techniques. When Shakespeare’s language is translated into dance, it’s more important than ever to include information about things like setting, character, and the story of the play itself through alternative means. Bob Crowley’s stage and costume designs for this adaptation had a narrative clarity that I don’t think I’ve seen in theatre before; The Winter’s Tale really came to life within the world that he created on stage.

The Winter’s Tale firstly works very well in the context of ballet. Theatre directors often struggle to deal with the fact that the play is somewhere between realism and fantasy – a ‘statue’ comes to life during the final act, for example – but that doesn’t matter so much in a universe where The Nutcracker, Sleeping Beauty, and Swan Lake exist quite comfortably. The Winter’s Tale becomes a fairytale rather than a slightly odd mix of tragedy and comedy.

In-keeping with this, the world of the play was that of a timeless fairytale. There was no recognisable place or period in which the story was set. Sicilia was a cold, dark, expansive palace framed by imposing stone columns, statues, and seemingly endless staircases, and Bohemia a colourful, fantastical land built around an enormous mossy tree. Large, painted images of mystical landscapes were placed at the back of the space to contextualise outdoor scenes, delicate snowflakes fell from above at specific moments, and a projected cloud effect gave the whole piece a gorgeous dream-like feel. I didn’t care that Bohemia is a landlocked country that can’t actually be reached by ship. I didn’t need to ponder the likelihood of the play’s more absurd plot points (‘Exit, pursed by a bear’, anyone?). I was more than happy to be transported to a different universe where all of these things happen just ’cause.

Showing the difference between Sicilia and Bohemia is one of the tricky elements of The Winter’s Tale, and the use of contrasting colour schemes and set/costume designs for each is a fairly standard way of differentiating between them. What was particularly impressive about Crowley’s designs, though, was the extent to which he gave each location a distinct culture. Together with the ballet’s score and choreography, the fabrics and styles of dress used for the Sicilian and Bohemian characters created two distinct aesthetics that fitted perfectly within the physical environments created on stage to represent each location. I really loved that this was evident from the very beginning of the piece. The story begins with King Polixenes of Bohemia visiting his childhood friend, King Leontes of Sicilia, and the characters onstage were immediately recognisable as being of differing backgrounds. Polixenes and his courtiers had a distinct cultural identity rather than being absorbed into a single homogenous aesthetic. When the action moved to Bohemia for the ballet’s second act, the setting was already familiar.

Another Huzzah! moment for me was seeing costume being used to indicate two very important parent-child relationships. When they were first introduced at the beginning of the ballet’s second act, Perdita (Leontes + Hermione’s daughter) wore a shorter version of her mother’s dress, and Florizel (Polixenes’ son) a tunic and trouser combo very similar to that worn by his father. This made it instantly clear who these characters were. I didn’t need to be told (by the personification of Time, as it is in Shakespeare’s text) that the two infants had aged sixteen years during the interval: I recognised these ‘mini-me’s as soon as I saw them.

These particular costumes also went on to serve more symbolic purposes as the narrative progressed. Florizel removed his tunic during the sheep-shearing festival, and Polixenes later threw it at his feet to remind his son who he was (apparently princes shouldn’t marry shepherds’ daughters…). The colour and style of Perdita’s dress, meanwhile, marked her out as a Sicilian rather than a Bohemian. Characters on stage may not have known Perdita’s true background, but we audience-members certainly did.

Crowley’s designs were crammed full of other clever, impressive, and/or outrageously cool things. An emerald necklace (the same shade as that worn by Leontes, who was green with envy) was presented to Hermione at the beginning of the ballet, and then sent with the infant Perdita to Bohemia. It later served as proof of her birth. Dreamy animated seascapes were projected onto enormous silk sheets hung across the entirety of the performance space, and the same sheets were swooshed downstage by stagehands to represent the shores of Bohemia. There was snow. There was a SHIP. THERE WAS A BEAR.

You should probably buy the DVD.